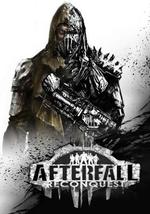 You’re stepping into a world after the outbreak of war. A war in which nuclear warheads weren’t the ultimate means of destruction, rather a stage in a self-made apocalypse. A new weapon was used. Nobody heard about the Entropy charges before the Day Zero and a few remained to tell the story after.

Only two groups of people managed to survive the apocalyptic conflict. The first consisted of the lucky ones who found shelter in one of the ’sanctuary cities‘ hidden deep in the mountains. Their luck, however, was the first resource to run out. Soon it became obvious that these havens weren’t self-sufficient. After a few years the resources started to deplete and when they finally ran dry, worn out and embittered survivors once again were forced to find a new place to call home.

Today, former inhabitants of the sanctuary cities descended into the valleys in search of fertile soil, clean water and resources to process into fuel and tools. Thus begins the RECONQUEST – slow and ardous process of taking the land back from mutants and wildlife and rebuilding the lost cities and civilization.